Although in nature canine companions do a fine job of giving birth on their own, you shouldn't rely on nature. Your dog lives in a different environment, eats different foods, and is largely dependent on you. 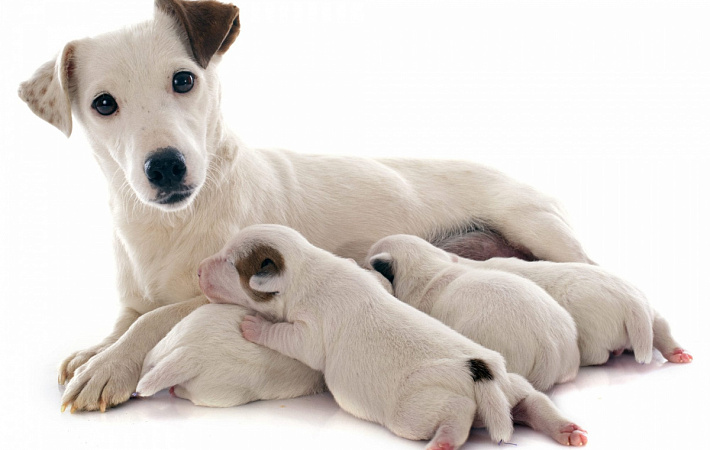 In most cases, the dog can give birth on its own, but it happens that without the owner's intervention, it and its future offspring may die. Therefore, it is important to properly prepare for the approaching birth.

Very rarely the birth comes unexpectedly, especially when it is a dog's first pregnancy. As a rule, even one or two days before labor, the dog becomes anxious, seeks a hiding place, becomes overly clingy and affectionate with you, looks you in the eye pleadingly, as if asking for help, refuses to eat. There are changes in the dog's appearance as well - the abdomen sags, the back sags, the genitals enlarge and mucous lubrication is secreted from the loop, and the nipples swell and enlarge. Forty-eight hours before parturition, the dog's body temperature drops to 37 degrees Celsius.

During this period do not leave your dog alone for a long time, because at any moment the labor can begin, and your help may be needed, besides, your beloved dog is very nervous at this time, she is afraid to be alone, without her beloved owner. Don't make her nervous because of your absence as well. Prepare in advance a maternity place for your dog, it should be in a quiet, warm, and cozy corner, away from the noise and fuss. Show her the place and observe your pet, perhaps you didn't choose the right one, and she'll indicate a better one to you.

To be fully prepared, prepare the following:

The prenatal period lasts from 3 to 12 hours. During this period the dog is too restless, anxious, trying to prepare the birthing area, breathing heavily.

The period of labor itself in a dog varies greatly and depends on the number of fetuses and the health of the expectant mother herself. Most often, with a small number of fetuses, a dog's labor can last 2-3 hours, while with multiple pregnancies, it can last 12-24 hours.

The interval between the pups coming out is on average 15-30 minutes, but with multiple pregnancies, the interval can increase to two hours toward the end of labor, which is very tiring and exhausting for the laborer. It is very important to determine whether the labor is normal or abnormally prolonged. If the interval between the expiry of the next fetus has gone on for 90 minutes or longer, or if the dog is exhausted, or is pushing a lot and to no avail, or if the pushing is very weak and not all the pups have come out, then you should call your vet immediately.

It can happen that only part of the puppy emerges from the loop during the pushing, but it can't go any further. Each push is accompanied by a part of the fetus coming out, and it is only necessary to pass the push, and the fetus goes back in. This is a situation that neither you nor your dog can deal with by yourself, so you should call your vet as soon as possible.

If your dog's labor goes well, you still shouldn't leave the mother-to-be alone. Some light but serious help will be required of you.

Puppies are usually born in a shell that the dog will chew on its own, but sometimes when the dog is tired or weak it can be difficult to reach the puppy. In that case, you will have to do it all yourself. To do this, remove the sheath, wipe the puppy as best you can with a clean dry towel, remove the mucus from his mouth and nose, cut the umbilical cord away from the abdomen and tie it carefully with silk thread.

Do not take the puppies away from the mother right away. This will make her very anxious and anxious. On the contrary, put them on her nipples. The colostrum is very important and necessary for them, and it will help the mother in labor by stimulating the pushing and speeding up the release of the subsequent fetus.

As new pups emerge, move the previous ones into the box, but not all of them, make sure there are always cubs near the birthing mother. In the box, you should put a heating pad wrapped in a towel. On this heating pad, place the cubs, covering them lightly with a second towel. The fact is that newborn puppies quickly drop in temperature, which can lead to hypothermia and, consequently, to colds. For the same reason, the room where the dog gives birth should be warm, well heated, without excessive humidity.

After each puppy is born, and sometimes with it, the afterbirth (placenta) comes out. The dog instinctively eats it. Eating the afterbirth is thought to stimulate the uterus to contract after delivery and help increase lactation. However, don't let your dog eat more than 2-3, or he'll get diarrhea. Be sure to count the number of afterbirths that came out, there should be as many as there are puppies.

Make sure that the bitch does not pull on the umbilical cord, and you do not pull it - this leads to an umbilical hernia in a puppy.

Sometimes newborns seem completely lifeless. Don't worry. Try to remove any mucus from his mouth and nose, massage his chest, turn him upside down, and shake him gently. Try to get him to make a sound and let him take his first breath.

After the birth, the maternity nest should be well removed, treat the bitch's external genitalia with an antiseptic solution and return her and her offspring to their place. It is very important to wash and clean the place of the mother and her babies twice a day for ten days. During the first ten days, bloody discharge appears from the bitch's genitals. Do not be alarmed, this is normal. Then they become thick and gradually stop.

During the first days after giving birth give your dog sour milk, yogurt, tea with milk in a warm state, give her cottage cheese, and special food for nursing bitches. Be sure to trim the puppies' claws so that they don't scratch their mother when feeding.

If your dog is low on milk or no milk at all, you should contact your veterinarian. He'll either prescribe lactation boosting medication or prescribe puppy milk from a store that sells it in pet stores.


We need to pay attention to this!

All of the above is a reason to go to the veterinarian urgently.

If this is your dog's first birth, it's best to enlist the support of a knowledgeable person, ideally a veterinarian. And don't invite friends over to watch your dog give birth. It's a good idea to avoid noisy company in the apartment at this time and in general not to invite strangers over. Take pity on your pet, she instinctively feels vulnerable and defenseless. She needs your care, affection, peace, and quiet.