Newborn puppies cannot empty on their own. Their mother massages the puppies' bellies to stimulate emptying. 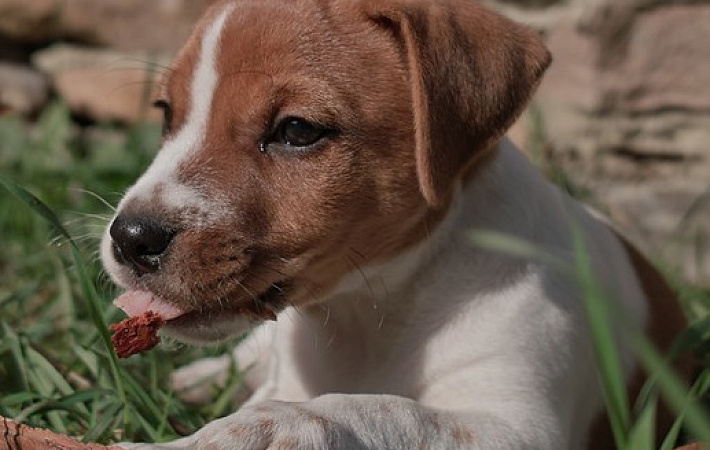 Once puppies are mature enough to crawl, they will instinctively crawl away from where other pups are sleeping to relieve themselves.

Cleanliness is built into dogs from birth. Since a puppy needs to empty about every couple of hours, when you think he's ready, take him to a pre-selected spot covered with newspaper or disposable diapers.

You'll quickly learn to recognize the signals that tell you it's time for the puppy to go to the bathroom. Your puppy needs to empty himself immediately after sleeping. If he starts circling, sniffing, and whimpering while awake, that's just the signal. Pick him up and immediately take him to the place you decided to make the "dog's toilet". If all goes well, be sure to praise Jack and give him a treat. This will make the puppy associate meet his natural needs in a designated area. Do this as often as possible and you'll be surprised how quickly Jack realizes what his owner wants him to do.


Unfortunately, it's only two weeks after his vaccinations, when he's fully immune to infectious diseases, that he can begin walking outside. Until then you'll have to accept the fact that the puppy's toilet will be in the apartment - he simply has no choice. But once you start taking your puppy out for walks, he'll quickly become unlearned at home.

Make it a habit to walk Jack right after he eats, after he sleeps, after any exercise or games, and before he goes to bed. This will help get your puppy accustomed to toileting faster.

One of the common mistakes made by dog owners is that when a puppy has almost stopped doing his business at home, the owner decides: from now on my Jack must only go to the bathroom outside and clean the house toilet. The poor puppy is confused. Even when Jack is almost all grown up, mishaps can happen. It can be caused by anything - an upset stomach, an infection, or, simply, a long time without a walk. All dogs are different, some stop walking at 5 months, others only at one year, it depends not on the education, but the physiology. So don't rush with the elimination of the diaper, otherwise, Jack will have no other choice but to walk where he wants himself.

If your Jack suddenly "goes" at home, never rub his nose in it or hit him with a newspaper. This is a perfectly natural process for a dog, and if he is punished, it may confuse and confuse Jack.