For some reason, it is thought that Jackies are naturally aggressive, especially males, who like to fight with other dogs. This is not true. 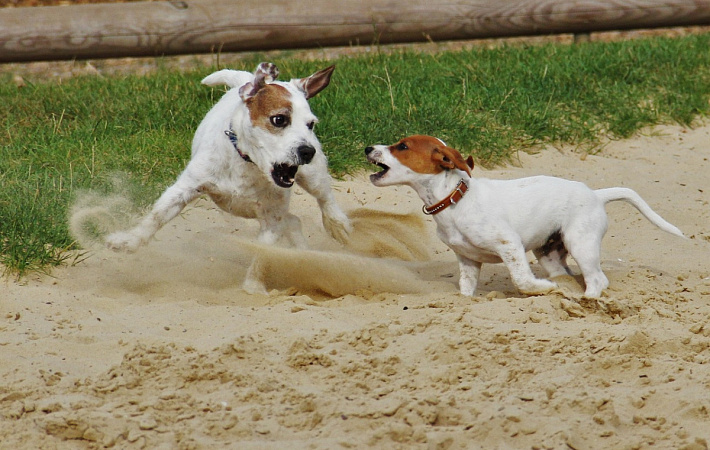 First, the breed was bred to work in packs with other dogs, where aggression is unacceptable, and second, imagine the situation: you're riding the bus and a stranger enters. You wouldn't jump into a fight just like that, without thinking, for no apparent reason, because you feel like fighting, would you? Of course not, because you do not know your opponent, he may be stronger than you and you will be defeated.

The same rule works in the canine world. Look at two unfamiliar dogs meeting on the street. They will never throw themselves into a fight indiscriminately (of course, there are rare exceptions among fighting breeds). They will do a kind of "doggy dance" of sniffing, rounding, pawing, and marking territory. At the same time, the dogs may make a variety of masturbatory sounds, puff up the hair on the scruff of the neck, and sneer. This way they determine how the meeting will end, whether there will be a conflict or they will disperse peacefully. If one dog puts its head on the neck or shoulder of the other, it's a signal of dominance. If the other dog lies on his back and shows his belly, it means he accepts the situation. As a result of this ritual acquaintance, the dogs are likely to disperse if you do not interfere with them. Under no circumstances should you pull your Jack's leash during introductions, as your interference may distort the meaning of the information Jack wants to convey to the other dog and provoke a fight.

Always remember that despite his small size, Jack is a brave dog who is not used to hiding behind his owner. However, he will not run headlong into a fight of his own free will. If he's turned into a bully, it's your fault. Aggression is a consequence of wrong upbringing and socialization since childhood. You just couldn't prevent it in time. Maybe when he was a little bully, it amused you, you let him act aggressively toward other dogs, and eventually that behavior took hold.

To avoid unpleasant or even dangerous situations with adult Jack, follow a number of simple rules from childhood.

In general, keep your hands away from the toothy mouths of fighting dogs. Don't yell or kick the dogs. It's best to separate the two fighting dogs by their tails (you can do it by their hind legs). Don't pull hard, just lift Jack's tail so that he gets his hind legs off the ground. When he loses his footing, he will stop fighting. If you're alone and you see someone else's dog winning, do the same to get him away from Jack.

Always be on your guard when walking your pet, because even a very well-mannered Jack won't back down, but will get into a fight if provoked by another dog.

What to occupy your Jack with