Before accepting little Jack into your home, agree with all family members on common rules that everyone will abide by strictly. 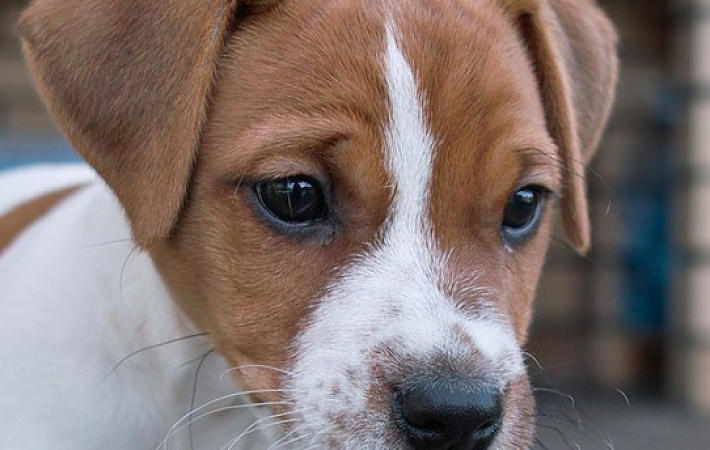 Agree right away whether you will let your Jack sleep in the chair, sit on the couch, sleep in the master bed. We are not stating whether this is bad or good. Just decide this question as a family. It is unacceptable for mom to let the puppy sleep in the bed and dad to chase him out of there. The puppy will just be confused, being scolded for something he was allowed to do before. It is important that in certain situations your behavior is always the same.

Don't let Jack do something occasionally, as an exception, in honor of a holiday, of what is not normally allowed. This will help establish your dominance over Jack from day one. You are the master, you make the rules. It doesn't matter if you let Jack sleep on the couch there's nothing wrong with that, it's your own business.

But, as for the table scraps, make a clear rule: NEVER! When the family is eating the puppy should not be under the table begging. He's so adorable and he looks up with those pleading, hungry eyes how can you not give him a tasty morsel? It can be fun and adorable when Jack is little. But when he's older, you'll have an annoying beggar swinging around at lunchtime and barking for treats. Besides the fact that the food from our table is not only not healthy, but also bad for Jack, it is very difficult to wean him from this bad habit (although, of course, any behavior can be corrected), because it is fixed from childhood.

Determine where the puppy's sleeping place will be. It should not be in the aisle, near radiators, or a draft. Keep it away from doors, so that when you leave Jack won't see the door you came through and won't try to follow you out. In general, leave it up to your pet to choose. He will go to sleep where he feels comfortable. Watch him and put his crib or couch in a spot he likes to sleep.

Always remember an important rule: "You are the leader of the pack and all initiative comes from you. The dog obeys your wishes, but not the other way around. The dog is for you, not you for the dog.

The location of the "doggy canteen" is also important. Once defined, it should not change. Agree on the commands you will use in different situations. Choose a single forbidding word: "Ew", "No", "No".

Determine who will clean up after the puppy and walk him. If you have children, actively involve them in caring for the puppy. This fosters children's sense of responsibility and instills a love for little Jack.

Set behavioral boundaries for your puppy. Jack always uses his teeth when playing. He doesn't distinguish between your hands, designer walls, and expensive furniture. You are the person who has to explain to him what he can and cannot pick up and chew. Don't let Jack play with your hands with his teeth. This can be painful and uncomfortable later on when his teeth change to stubborn ones. If your puppy grabs your hands with his teeth, firmly tell him "No" and offer him a toy instead. When the puppy takes the toy, praise him. Be persistent and he'll understand his boundaries.

Jack needs to know what he can and can't do, and he needs to know who's in charge. This will make his life and yours happier and calmer. If you don't explain to him the "rules" of behavior in your pack, it can lead to behavioral problems later on.

Always remember stability and consistency in training help the puppy gain confidence and peace of mind.

When you first brought your Russell puppy home, he would jump on your arms, lick your face and bite your wrists - you thought it was very cute. You caressed and kissed and stroked him back. You may have even encouraged him, but a year has passed, Jack is still jumping and licking and petting, but you don't think it's so cute anymore. The behavior that was previously encouraged by petting and caressing has suddenly changed to anger, pushing away, and disgruntled looks. What must the dog be thinking?