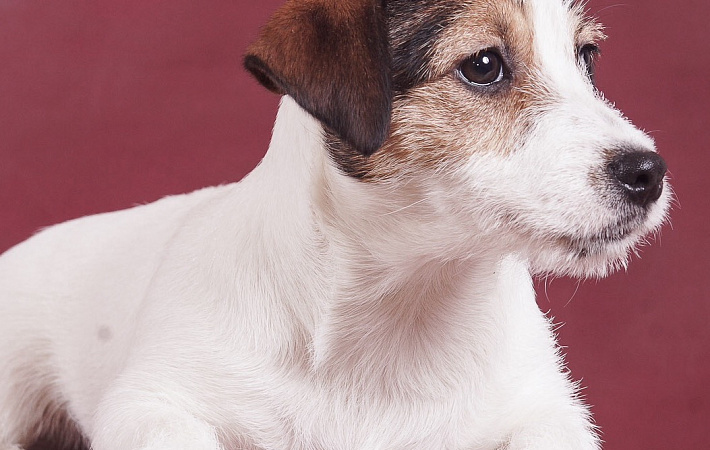 Generally, it refers to human body care, but we use it rather narrowly and mean comprehensive care of a dog.

Who else can be as pleasing to the eye as a clean, combed, groomed Jack? Only a very well-groomed Jack! To avoid problems with combing, bathing, etc., train your puppy in all the elements of grooming from day one.

As previously mentioned, Jacks come in 3 types of coat: smooth, stiff, and intermediate. The different types of coat require different care, which consists of keeping it clean, brushing, and trimming.

Being an active and inquisitive dog, your Jack will always find something to get dirty on, and considering his white color, any dirt on him will be very visible. But don't rush to bathe him every time he gets dirty (unless, of course, he's wallowing in rotten food, following his ancestors' instincts).

Through the process of breeding, Jacks have developed a coat that repels dirt. Simply wipe paws and soiling areas with a damp towel or special cleaning cloths. The dirt will easily scrub away. In general, try not to bathe your dog often. Do it only as needed. Girls should be bathed after the end of their heat. If you take Jack to a show, you will have to wash him before every show.

The fact is, frequent bathing dries out your dog's skin, removes his natural protective layer, and leads to dandruff. Even if you do use expensive dog shampoos, don't overdo the bathing.

Jack is small, so you can bathe him in a basin. If you bathe him in a tub, be sure to put a mat on the bottom to keep his feet from splitting so he feels secure.

Put cotton pads in Jack's ears before bathing to keep water out. The bathwater should be slightly warm, not hot.

Wet Jack's whole body first, then shampoo and lather it up, avoiding contact with his eyes and ears. Then rinse thoroughly under running water.

After bathing, you can use a special rinse. If your Jack has a tough coat, avoid using oil-based shampoos and conditioners, because the coat will become stiff and may become "puffy," which will lower your show grade.

In pet stores, you can buy special shampoo for paws with a dispenser, which will come in handy for washing your dog's paws and belly. Especially in winter, when our streets are watered with different chemicals, it is necessary to use this shampoo in winter, it will help protect Jack's paws from irritation.

Why do Jacks like to soak in rotten food? If your Jack finds a dead mouse, bird, or frog, he will definitely try to "cushion" himself with that smell. Look at the pleasure he takes in lying on a dead carcass. Even if you scold him and try to wean him off this bad habit, most likely you will fail. This is an ancient instinct. Before hunting, the ancient ancestors of dogs used to poke around in someone else's scent, thus trying to mask their own scent so that the prey would not smell the approaching hunter. Even though your Jack is already domesticated, the ancestral instinct is still alive in him.

After bathing, dry your Jack with a towel. A hairdryer can scare him, and it dries his skin too much. As he dries, you'll enjoy watching him scurrying around the apartment, climbing on and off beds and chairs. This way Jack speeds up the drying process on his own. Play with him and reward him for good behavior during bath time. After bathing, keep your pet outside for several hours to prevent hypothermia.

Jack's coat requires special care during the molting period. Outdoor dogs molt twice a year, in the off-season, replacing the winter coat with the summer one and vice versa. Our indoor pets have no distinctive shedding periods since they don't notice the changing seasons so they shed almost constantly. Only regular brushing will help you get rid of annoying white hair all over the house.

Teach your Jack a comb from childhood, because brushing is the best way to remove dead hair. It's also a good skin massage that improves circulation and enhances new coat growth. For the most part, Jackies love this procedure and are happy to put different parts of the body under your hand with a comb. Short-haired Jackies don't need frequent brushing, once or twice a week is enough. You can use a bristle brush, an ordinary metal comb, or a FURminator (a very handy tool for removing a dead undercoat, affecting the hair shaft).

Coats of hard-haired and intermediate Jacks, starting at 3-4 months of age, should be trimmed. Trimming is a kind of artificial molting. It's plucking the dog's dead fur. Jack's non-molting coat looks dull, uneven, and its structure may be disturbed. In addition, the dead hair itself cannot fall out and makes Jack uncomfortable. You can learn how to trim it yourself, by hand or with a special knife, or you can invite a specialist. If you exhibit your pet at exhibitions, it is better to address a professional acquainted with exhibition standards that a trimmed Jack's coat should meet. Dogs are usually trimmed once or twice or three months. Between trimming, comb Jack's coat with a regular comb.

If you have trained your dog to brush his teeth since childhood, and you continue to do so regularly, chances are he will not develop plaque or tartar. The speed at which plaque and tartar build-up vary greatly from dog to dog, depending on his physiology. Some dogs need a visit every six months, and some don't even need dental care until they're old enough to eat. If you find tartar on your pet, it should be removed.

You can do it yourself with a metal dental spatula. Tartar can be removed very easily, like an eggshell, if you use a spatula to gently slide it from the gum down the tooth. If you don't decide to do the procedure yourself, a veterinarian is always there to help.

Keep Jack's eyes and ears clean at all times. If they are clean, no special care is needed. If you notice traces of dirt or any discharge in the ears, if there is a bad smell, clean them with a special ear lotion. Always clean only the visible part of the ear, without going into the ear canal. Sometimes brushing doesn't help and Jack starts scratching his ears and shaking his head. It could be inflammation or an ear mite. To determine the exact cause, you should have a test done at the veterinary clinic. The doctor will prescribe a treatment. Do not try to treat sore ears, since without a proper diagnosis you can only harm your pet.

You can wash his eyes with tea, chamomile infusion, or eye lotion. Minor discharge is acceptable, it may be dirt or dust washed away by a tear. If eyes are red and Jack scratches them with his paws, use Albucite eye drops to relieve irritation. If symptoms persist, go to the vet for a visit.

Jackies are very agile. If you take your pet for many walks, his claws are usually ground into the pavement and do not need to be trimmed. However, if you live out of town, this is not possible, and claws need to be trimmed regularly, otherwise, they will interfere with Jack's movements. Claws should be trimmed as they grow. Jack is accustomed to this procedure since childhood. Adult dogs' claws are quite hard, so don't try to cut most of the claws at once, do it gradually. And always remember to cut only the dead part of the claw, otherwise, you'll hurt him. If you cut too much and it bleeds, cauterize the cut with manganese or put it in baby powder, the blood will clot and stop. Be very careful, or the next time Jack sees the nail clippers, he'll be hiding from you. Don't forget to give him a treat after his haircut, so he knows it's a nice treatment after all.

Quite often owners are simply unaware that their pet has paired glands located near the anus, called anal or perianal glands. But everyone has heard about how sharp and unpleasant the smell of skunks is. Not without reason we have caught on the expression "stink like a skunk", although the skunk is not so easy to meet in our strip. This unpleasant smell is produced by a secret produced by pararenal glands. They are located under the dog's tail, just as in the skunk, on both sides of the anus, at about the 4 and 8 o'clock positions. The secretion of these glands is secreted into the rectum to facilitate defecation. The secret also serves the dog as marking territory.

If you notice that your Jack often licks his tail, bites out the hair around his anus, or has an unaccustomed foul odor, then he needs his anal glands cleaned. In advanced cases, bleeding sores may appear under the tail. Don't wait for the glands to become inflamed, take Jack to the vet or you can clean them yourself. It's an uncomfortable procedure, but it's fairly simple. Take a paper towel folded in several layers. Hold the tail upright with your left hand and place the paper towel on the anus with your right hand. With your thumb and forefinger, press down on both sides of the anus, as if trying to squeeze out the liquid. You will see a light yellow or beige-colored secret that has an unpleasant odor on the tissue.

Be careful and attentive: if you do not put the napkin tightly - oops! The secret can splash on your clothes or walls. This smell is very difficult to get rid of afterward.

How to fly with your dog

With Jack to the show