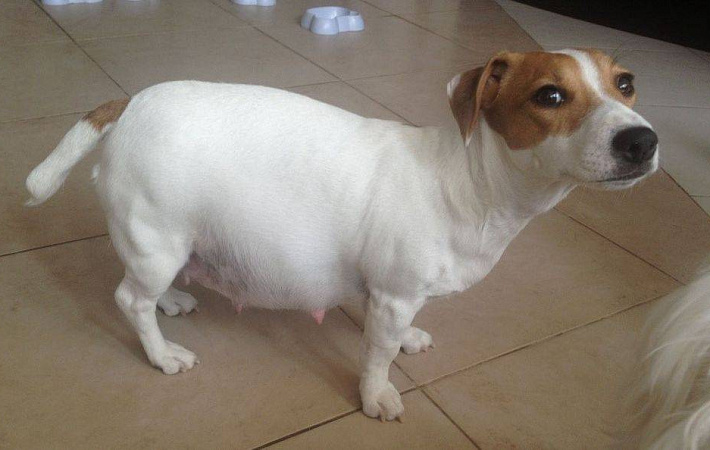 After intercourse, spermatozoa can remain viable for up to 5 days in the bitch's reproductive tract. Consequently, fertilization of the egg can occur up to 5 days after mating. Hence such a wide fork in the duration of pregnancy.

It is almost impossible to determine pregnancy in the first half of the term. Therefore, there is no need to change your pet's lifestyle and diet. Indirect signs that conception has occurred may appear on days 22-28 of pregnancy. Your pet may refuse to eat, and mucous discharge may appear from the loop. Do not force her to eat, leave her the right to act as her body dictates. Make sure that water is always available. Starting on days 30-35, your nipples may become swollen. Pregnancy can already be detected by ultrasound. From this time, the growth of the fetus begins exponentially, which entails an increased need for protein and carbohydrates. The enlarging uterus begins to put pressure on the stomach, preventing the dog from eating a large amount of food at a time, so it is necessary to move it to three meals a day, and closer to delivery to four meals a day.

In the second half of pregnancy, it is necessary to review the menu of the expectant mother. Nutrition should not be too plentiful, as the fattened bitch may have problems in childbirth and during the breastfeeding period.

If you fed ready-made dog food before conception, it's a good idea to switch the expectant mother to dog food for pregnant dogs in the second half of pregnancy.

If you feed your dog "straight food", then in the second half of pregnancy the amount of food intake should increase at the expense of foods containing proteins. Do not forget vitamins A, D, and E. Of particular importance are calcium preparations, which serve as the basis for building the bone system of future puppies. Keep in mind that puppies will take what they need from their mother's body, but the pregnant herself, to maintain her health, needs an additional intake of minerals from food. Lack of calcium and vitamins can be made up for by adding special vitamin complexes to food, such as "Dog Mama".

Walks are very important for a pregnant dog. From the 35th day onwards, the length of walks should be shortened. Don't let your jumper bounce around like she used to. And in general, you will notice that she has become more sedate, slower, she is busy with the important business of carrying and preserving her future offspring. Cut her down on her walks, but increase them, as her uterus is growing and she needs to urinate frequently.

Ten to 12 days before the birth, you can feel the puppies moving by placing your hand on your pet's belly. Gently stroking the belly will give your dog a lot of pleasure, and it's also your first tactile contact with the puppies.

A dog's pregnancy is sometimes complicated by various factors. A dog may have toxemia accompanied by vomiting, nausea, and refusal to eat.

You should also be concerned when you observe excessive shedding of your pregnant dog. In that case, you should consult your vet and talk to him about the dog's diet.