The simplest and most useful commands that are useful in everyday life. 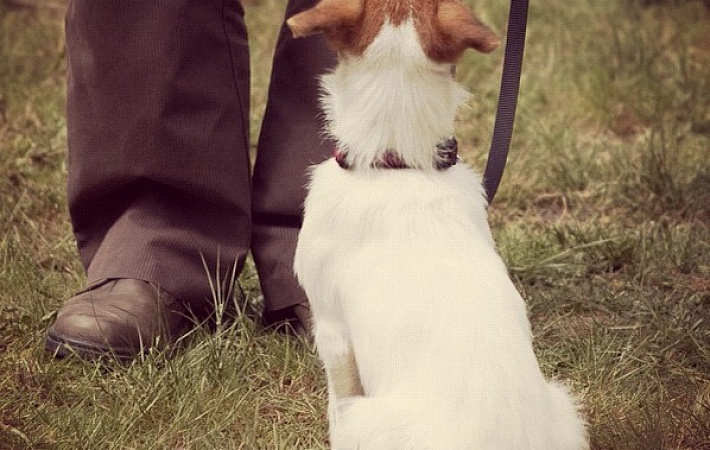 Do you know what word is most pleasant to the human ear? His name, of course. Your Jack's nickname will be his favorite word, too, because it's always followed by a happy event. It's best to choose a name for your puppy before you even bring him home. Only call the puppy by his first name and avoid "baby," "paw," "handsome" and so on. Call his name if he turns to you, praise him, give him a treat, or start a game. Then move away from him and call out again. Give him a treat and praise every time he responds to his name. Very soon he will have a strong association of his name with something pleasant (a treat, a game, praise, a walk, etc.).

The most important word you should teach your Jack is the word "NO" (Don't, Ew, Drop, Ouch, etc.). This is the word you will use later on to indicate unwanted behavior, to set boundaries on what is allowed and what is forbidden. The word should be associated with any negative action that follows the command "No!" in your puppy's mind. The impact can be anything. For example, on the street after the word "No" you can do a tug with the leash. If Jack does something forbidden, being at a distance from you, you can throw something at him. You can buy special Fisher's disks at the pet store for this purpose. This is analogous to a bunch of rattling keys, which are quite light but make a lot of noise.

When teaching the forbidden command, it is important to offer an alternative activity to replace the one you don't like. For example, Jack has stopped chewing the leg of a chair on your command. What next? He doesn't know what to do, so offer him something to do instead that both of you like.

If Jack is near you and you don't like what he's doing, such as pulling on your pants, say no and pinch him lightly at the groin, the skin fold between his hind leg and belly (it doesn't hurt, but it's quite unpleasant), He will immediately release his pants to see what's pinching there. There is no need to raise your voice and scare him. Soon enough Jack will know that the word "No" is followed by an unpleasant sensation and will stop what he is doing. Praise him generously for his obedience and offer him alternative play.

The second most important command is after the forbidding command. This command will help you avoid a lot of trouble while walking. For example, chasing a cat across a busy street. The command "Come here!" will stop him, maybe even save his life. This command can be taught for a treat or toy. You give the command "Come here!" and try to get your Jack's attention - with a voice, a treat, a squeak of a toy. When he, interested, comes to you, encourage him, praise him. This can be a game or a treat. Practice the command at home so that Jack does it with joyful enthusiasm.

All dogs are divided into "playful" and "food" dogs, depending on which reward they prefer. Some respond more readily to food, and some to a toy. Basically, all Jackies are "play" dogs

After that, you can make it harder and move outside, where there are many distractions. Start giving the command when Jack is on a leash and you have a chance to control him. When the command is obeyed unquestioningly with the leash, try to take it off. While walking, call Jack to you with the command "Come to me!" as often as possible, encouraging him each time.

These commands include "Sit", "Freeze", "Lie down". Very useful commands for fixing the dog for some time while waiting. For example, you come with Jack from a walk, he needs to wash his paws. But first of all, you need to undress. For Jack not to dirty your apartment, you give him the command "Get down" and "Wait". You at this time quietly undress, go, turn on the water in the bathroom, and only then call the dog.

"Sit" is the easiest command for dogs to learn. However, if you will exhibit your dog at shows, teach him to "Freeze" first, so that in the ring Jack will not try to sit down at the slightest opportunity, but calmly stand.

Stand in front of Jack, take the treat in your hand, and raise it above his eye level. When he raises his head to look at the treat, use your free hand to push down on his croup so that Jack sits up. When he sits, give the command "Sit," praise him, and give him a treat. Repeat the exercise several times.

Jack is in a sitting position. You bring your hand with a treat to his nose and gradually bring your hand down and slightly forward. The puppy reaches for your hand and assumes a lying-down position. Then give the command "Lie down", praise him and give him a treat.

Use a leash or any other method to make Jack stand. Then give the command "Freeze", praise him and give him a treat.

After teaching Jack static commands, train him to stay in one position for as long as you need him there. For example, give the command "Sit", after Jack sits, encourage him, then take a couple of steps away from him, saying "Wait". If he stays seated, go back to him and give him a treat. If he gets up behind you, return him to his original position, without encouragement. Increase the distance to which you move away gradually. Then try to go into another room.

Jack must be sure that you come back to him and praise him, no matter how long you were away.

Try doing the "wait" command outside, where there are lots of distracting interesting things.

We have listed the simplest and most useful commands that will be useful in everyday life. However, you can expand the list on your own, it's up to your imagination.

Jacks love activities and can learn many commands and different tricks.

Go ahead, have fun both you and your Jack!