Who is he really, this small, compact, merry little devil? The history of the Jack Russell Terrier (aka Parson Russell Terrier) is a mixture of legend and reality. Where legend ends and truth begins is still a matter of debate among breed lovers. 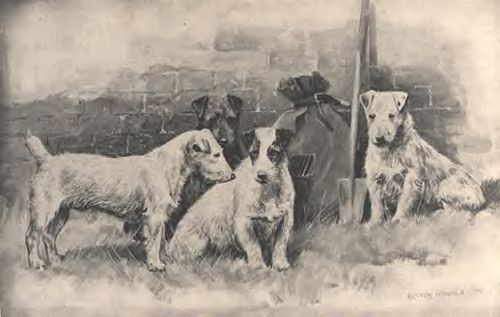 Let's start with the facts. One important point is that terrier-like dogs have existed in Europe since at least the 6th century, and perhaps even earlier in the British Isles. England can be considered the birthplace of terriers. Aristocrats gave each other terriers, which were highly valued as rodent catchers because of the large presence of rats and mice in the damp dungeons and cellars of houses. The primary function of these dogs was to control rodent populations and guard the owner's supplies. On farms that raised poultry, terriers were also used to hunt predators such as foxes and badgers. To cope with the task, a terrier had to have several special characteristics: small size, nimble, brave to follow the animal into the burrow, formidable to gnaw on the victim if necessary.

The name "terrier" comes from the Latin word "terra," which means "earth. For their unique ability to work underground, in the burrow, terriers were called "earth dogs".

The appearance of the ancient terriers varied greatly, but the common features were small size to fit through a fox hole, a coarse coat, and an uncircumcised tail. Because all terriers were working dogs (the term "working dog" means a purely utilitarian use of the breed for any human need, be it hunting, guarding, or herding), their appearance was not given much attention. White terriers were either never encountered or were very rare because hunters associated this color with congenital defects of the dog, such as deafness or infertility.


You may ask, then, where did these working terriers of predominantly white color come from? One of the most common versions is given in almost all books about Russell Terriers. It lies in the fact that in the 1700s, fox hunting became very popular, as one of the entertainments of the nobility. Hounds were used in the hunt, whose task was to chase and kill the beast. However, if the fox was trapped in a hole, the hounds could not get it out. And then the terriers came to help, which climbed into the hole and drove the predator out of there. So that the hounds would not confuse the terrier with the beast and kill it, allegedly began to cultivate in the terriers white color. Indeed, such tragedies sometimes occurred in hunting. However, a white terrier also becomes a dirty color after going into a burrow and it is the hounds' job to distinguish the beast by smell, not by color. Therefore, the theory that white terriers appeared due to the popularity of fox hunting with hounds seems somewhat dubious upon closer examination.

There is another version. England in the mid-18th century was characterized by bloodthirsty manners. The public enjoyed sports or shows in which blood was spilled, animals were maimed or killed. What were the dog fights, dog fights with bulls, monkeys, and even with a man! In these fights, bulldogs were used, who were the very embodiment of the devil, fearless, bloodthirsty, strong. Terriers participated in other mass spectacles - killing rats and baiting badgers. These disgusting "games" were very popular, especially among the poor. In the badger "games," a badger was placed in a barrel from which a terrier had to pull it out. The winner was the dog who pulled the badger the most times within a certain time.

The killing of rats took place at the bottom of a small pit, where a mass of rodents and terriers were released. The one who killed the greatest number of rats was the winner. Such fun required from terriers not only strength and courage but also agility and endurance. But the British terriers were not tough enough or strong enough to do the job. To give the Terriers the necessary qualities, they were crossed with Bull Terriers, and the result was a fast, intelligent dog with the grip and ferocity of a Bull Terrier. White or spotted coloration was common among bull terriers. This interbreeding likely is what led to the terrier's predominantly white coloration.

What bloods were not added to the terriers of that time? For aggressiveness and ferocity the Bull Terrier, for more speed the Greyhound, for a stronger sense of smell and a more trumpet-like voice the Beagle, for more intelligence the Corgi. Thus the terrier was a type of dog, not a breed per se.

Legends of the breed