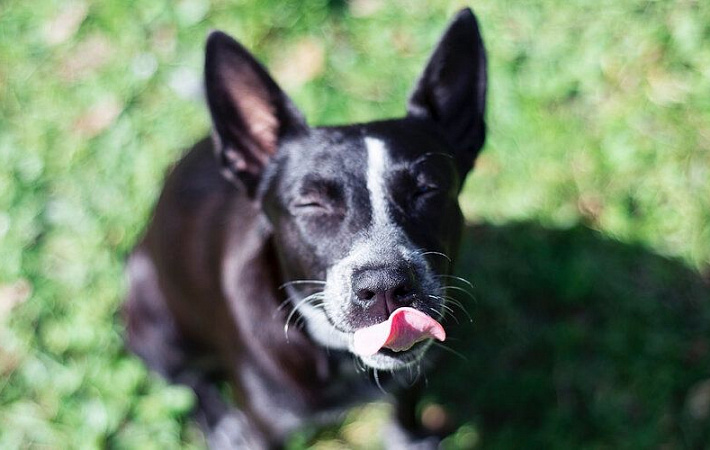 All dogs are picked up lying on the ground at an opportunity. Even those owners who are 100% sure their dog can't do it are picked up. No one can convince me otherwise: stupid exemplary performances like "look, there's a sausage under his nose, and he doesn't take - what do you say to that?" don't count at all.

Anyone who knows a little bit about dogs understands that to prepare and videotape such a trick with the vast majority of dogs can be in half an hour, but this is the only thing on their future behavior such as "exercises" will not affect. Swimming, as they say, we know.


There's a lot of advice, but not much use 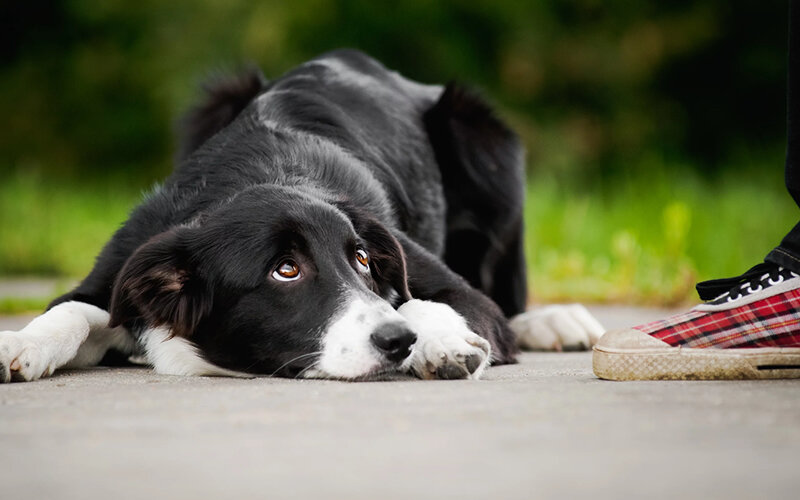 I see a lot of the owners are frowning now. What, hopelessness? Not weaning? The Internet breaks down from articles and videos of experienced advisors, which lined up if you run the browser and enter the search engine query. Moreover, the ghost of all these practical tips will long haunt you when surfing the Internet on the will of intelligent targeted advertising.

And I am sure that this problem, with its seeming simplicity, has no effective solution. At least, a solution that is within the framework of the human attitude to animals: any measures of influence that can have any significant impact on the situation, are associated with a strong painful effect.

Before you can solve a problem, you need to understand why it occurs. First and foremost is the desire for food. A puppy grows up quickly and this process requires resources, which is why the body experiences constant physical hunger. Naturally, a hungry animal will pick up any food on the ground.

But a young dog is not the only one who is alive with food: picking up everything that is lying there is an important part of research behavior. By grabbing and chewing something in front of his eyes, the puppy receives information about the world around him and takes notes on the future.

The dog's notebook is entered into his brain record by record. Something like this: "Yeah, the crust of bread smells like this and can be eaten if you eat it. But the bag of chips, although it smells nice, except for the toy is not good for anything: perhaps it is worth spitting out and not wasting time on it.

It's useless to swear at the puppy. He learns about the world, and the constant shouting or poking of the owner can only spoil the relationship between man and dog. Be careful to take away the puppy's most unpleasant things, but be aware that after a few seconds he'll probably have something just as unpleasant in his mouth.

If puppies, like little children, are pulled into their mouths by anything that isn't jammed, then adult, experienced dogs will only give preference to eating. For them, the food they find is a vital resource that should be either immediately consumed or safely hidden for the future if possible. When else will they be able to enjoy a delicious rotten bone or a fabulous bread crust?

Items of most interest to dogs can be markers for deficiencies in certain substances or signs of problems in the body. This is most true of conditionally 'inedible' objects: for example, the desire to lick beer and eat cigarette butts most often indicates a lack of B vitamins, eating earth - the desire to get rid of parasites, and interest in the excreta of herbivores is often associated with fiber deficiency.


You can't solve the problem by just changing your diet 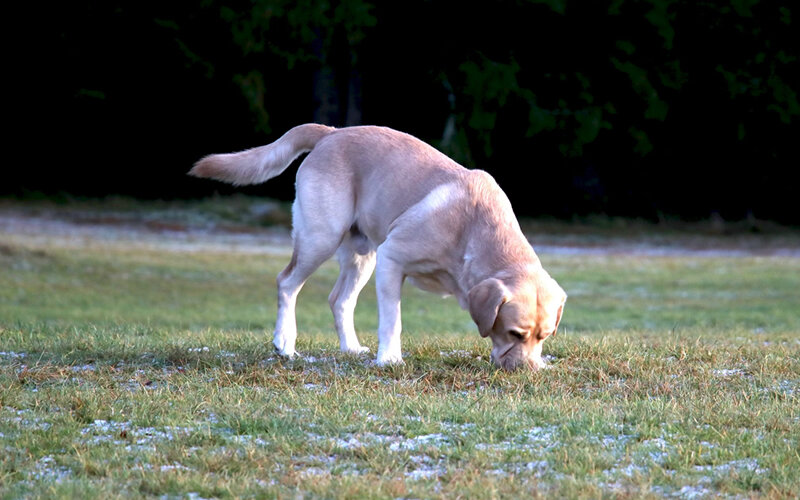 Even though the history of human and dog life together counts tens of thousands of years, it has not made the animal less "animal". Just as at the beginning of their evolutionary journey, dogs need to find, use, and protect resources - this is the ultimate law of survival.

Powerful drivers are built into a dog's brain, forcing him to do several things, a tangible part of which is either disapproved or directly encouraged by humans. Selection from the ground is one of them. It is possible to forbid a dog to pick something up, but it is not possible to make him "want" to do it.

Imagine walking down a deserted street, you find a wallet full of money. Money is a vital resource, and even though the attempt to steal someone else's property is a criminal act, in your mind will fight two attempts - to give or take away. Whatever the case, you cannot force yourself to "not want" to get that money at all. 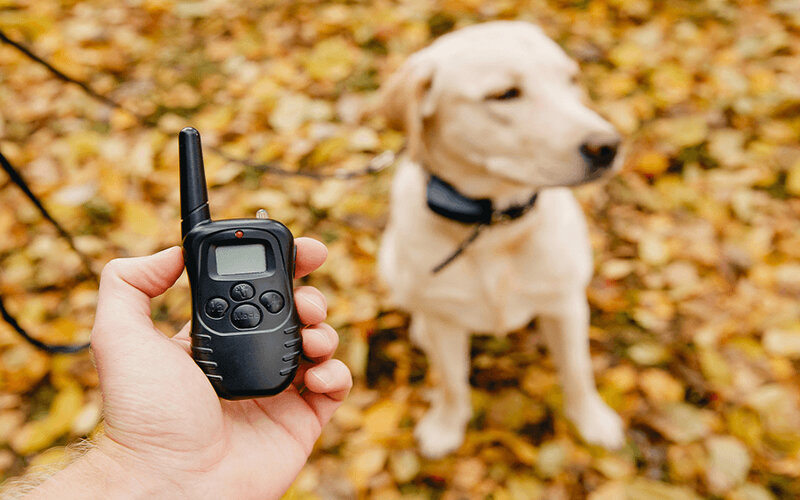 Yes, without using a strong painful effect, a dog cannot be forced not to pick up nasty things from the ground. Not to pick up in the absence of direct and direct human control, of course: my words should by no means be perceived as a call to let everything go on its own, say, let it vacuum since it is so bad.

You can and should control the dog. Control involves the active participation of the person in the process, and I'm sure that for those who are not lazy, everything will work out. Yeah, there's gonna be glitches. There is no doubt that you will not be able to fully control your dog and a certain amount of laziness will be eaten up. Is it unpleasant? Yes, but most of the time it's not fatal.

Does the muzzle solve the selection problem? No, it doesn't. It only preserves it, putting off the dog's ability to pick up the object of interest. The muzzle creates a false sense of confidence and peace of mind, as it does not formally require any human involvement.

But here, in my opinion, is the trick: being by chance, without a muzzle, the dog will calmly send into his mouth everything he finds, because no one explained to her that it is not worth doing.

Just as useless are the attempts to "practice" the command "Can't" by throwing a sausage and forbidding the dog to pick it up.

Throwing and banning is a good way to introduce your dog to the "Can't" team, but a lasting long-term effect is hard to be expected.

The effect will be local, "here and now": the dog will make the logical conclusion that it is not necessary to pick up this sausage here in this place and with such actions of the person. When the work is done, he will go and eat the long-serving bone in the nearest bushes. 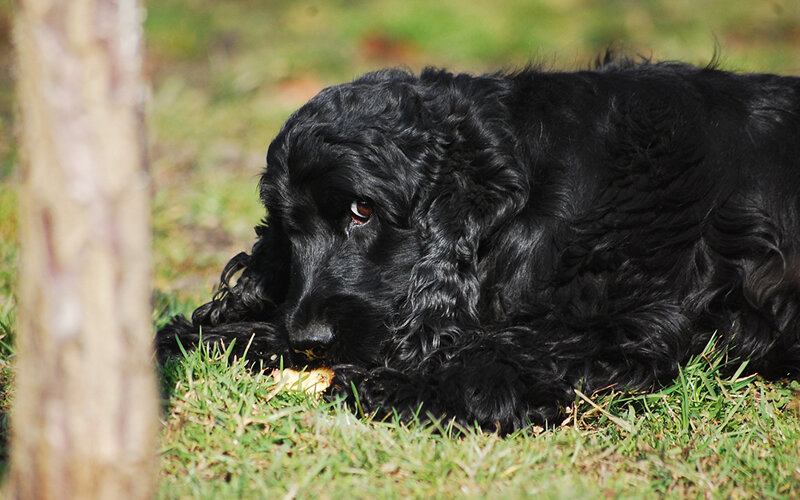 Paying attention to your dog's behavior and being able to read his body language will help to avoid wasting energy and nerves. I know there are at least three behaviors that clearly show the goals your dog pursues when sniffing around in the grass.

Relaxed, leisurely sniffing combined with quiet movements, with no obvious signs of interest, such as tense ears or a muzzle, are most likely to indicate that he is 'just walking around' collecting and sorting out general information about the world around him. Occasionally, his motivation may be interrupted by sharp dotted 'nuisances' showing that he has found something interesting, but not necessarily food.

Searching for food is characterized by a distinctly targeted behavior where all of your dog's senses are subject to a single gust: finding the source of the attractive scent that the breeze carries. His ears are tense, his eyes are looking out for something in the grass or bushes and his movements are fast but not fussy. The dog "hunts" food, quickly narrowing down the area to find it, and in the end, he grabs what he finds.

And the third option is hedonic satisfaction from the excrements found. If you see this once, you will never be mistaken again: if you find that you can roam in a pile of impurities or eat feces, your dog looks incredibly satisfied.

Only the second option, related to finding food, requires serious human attention. Once you've learned how to target your dog, the owner will be able to react accurately to his behavior by issuing a strict banning command or throwing keys at the dog: I love this method of action for its simplicity and efficiency. The main thing is to get there in time before the dog picks something up.

When a dog has a bone in his teeth or broken bread in his mouth, shouting "You can't" is often useless. You'll have to go into a race to get a dog that you can't always win. It is necessary to think ahead, negotiate with the dog, and make every effort for it to give the man's prey, then the next time (and he will come, do not doubt) to solve the problem will be much easier.

Dogs can share their prey but do not like it when food is taken away by force, and also accompany expropriation by shouting and beating.

Perhaps I am wrong to look at the problem of picking up nasty things from the ground at this angle, but such a look can save an incredible amount of strength, nerves, and time for any owner.

Let the possibility of errors arise. Go for it, fight! Achieving the ideal is hardly possible, but to get in pursuit of him nervous breakdown is more than real. Clinics of neuroses are full of figures with such inordinate perfectionism in history. Look at things wisely and be healthy!

Can I give the dog bones?